In harder times I used to fantasize that I would win the lottery.  The future seemed so bleak that only a miracle could save me from the daily struggle that was my life.  I didn’t have the money to do the fun things that I dreamed of, but with a dollar I could buy into the fantasy that I would be rescued.  That miraculously I would be divinely favored and I would get the life I surely deserved.  As you can probably guess – it never happened.

Well, that isn’t entirely true.  During a particularly challenging period in my life I received a notice to pick up a registered letter at the post office.  My ex husband and I had had a tumultuous relationship and i thought ‘what now?’ A part of me didn’t even want to pick it up, but if it was a legal issue, ignoring it wasn’t going to save me from the fight, so I bit the bullet and drove to the post office.

What I received was a miracle! – A large envelope with no return address mailed from somewhere in the mid-west where I knew no one.  It contained a large chocolate bar, inside of which was a golden ticket and two $500 money orders!  I thought for sure that they had to be fake, but the bank assured me that they were legitimate.  There were only a few dollars in my bank account, so I didn’t have anything to lose if they were a ‘gift’ from a Nigerian prince 🙂

That money was a God-send and to this day I have no idea what angel sent it to me, well maybe one, but if it was her, she played it really cool when I told her about it 🙂  I will never forget that gift and I still have that golden ticket.  I have paid it forward in times when I knew friends were struggling.  But if I were to win the lottery I would love to blanket the planet with golden tickets. Because it isn’t the the millions of dollars that go to one that make the biggest difference, but the small gifts to millions that lift us all up.

Whenever I fantasize about winning the lottery I think ‘how I could do or have those things happen in my life without the lottery?’ So, I would like to offer you a challenge.  I challenge you to print this golden ticket and to send it with a chocolate bar and whatever amount you can afford to someone you know needs a miracle.  Let’s see if we can blanket the world with golden tickets! 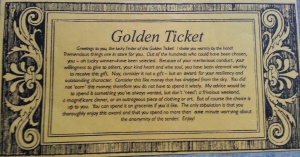 Workshops via Zoom. Sign up early, so that I can have the materials out to you in advance.